Happy Friday everyone. Sharemarket continues to soar, gold is at a record high in Australian dollar terms and the Aussie dollar itself is at an 11 year low.

It has been a big week of contrasts for financial markets

– The sharemarket has been driven by good profit results from major companies.

– Gold is soaring because of the decline in the Aussie dollar and a flight to security of investors spooked by the ongoing Coronavirus pandemic.

– The Australian dollar dropped below US67 cents today because those Coronavirus-spooked investors see the US dollar, as well as gold, as a safe haven. (US dollar goes up in value which pushes the Aussie down by comparison). Plus this week’s increase in unemployment is lifting the expectation the Reserve Bank will cut official interest rates next month.

But just how bad were the jobs figures?

Yes the rise in the unemployment rate from a 9-month low of 5.1 per cent to 5.3 per cent looks bad. But the reason wasn’t because fewer jobs were created … it was because more people were looking for work.

It’s called the “participation rate”… the number of people looking for work. Would you believe Australia has one of the highest participation rates in the world at 66.1 per cent. That is, more of our population is working (proportionately) than most other countries.

As for jobs being created, there are still plenty out there. Around 160,000 jobs are currently being advertised.

The fact is, the job market showed amazing resilience in January. An additional 13,500 Aussies entered the workforce. Over the past three months to January, job gains totalled 79,300 despite bushfires, pandemics and summer holiday season.

Which is all the more impressive given the challenges of bushfires, smoke hazes and the novel coronavirus outbreak – all weighing on the economy. And in the nation’s capital – the ACT jobless rate fell to 11-year lows of 3 per cent.

I reckon we should call it the AUSDAQ.

It’s fabulous that our technology sector is thriving to the point it deserves its own index on the Stock Exchange. For so long our big listed companies have been in old fashioned industries (like banks and resources) while, by comparison, the most valuable companies on the US sharemarket are mainly new age tech stocks.

Our All Tech Index launches on Monday.

According to the Australian Stock Exchange boss, Dominic Stevens, over the last three years, the annualised total return from the S&P/ASX 200 (the 200 biggest companies on the stock market) has been around 10 per cent, while the return from the new All Tech Index over the same period, if it had existed,  would have been over 20 per cent. 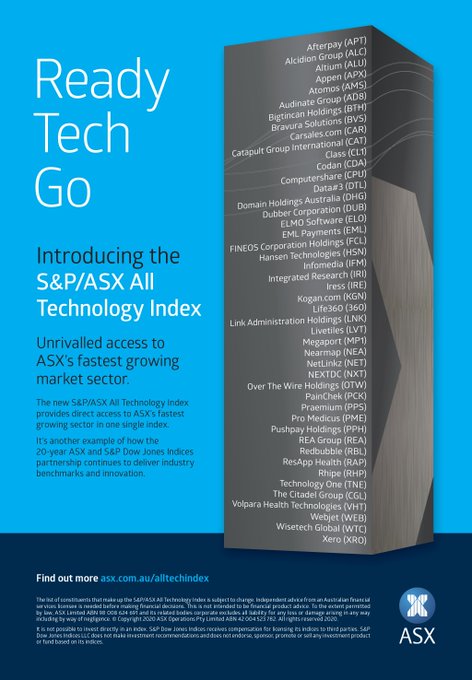 The $5 pizza is a financial bonanza

I sometimes think corporate Australia overthinks things way too much. That often the simple things appeal to customers and can drive financial success.

A case in point this week has been Domino’s Pizza which is enjoying its strongest Australian store sales in three years. Why?

Firstly, thanks to the growing behavioural trend of “cocooning”, when people stay at home on the couch and binge on Netflix rather than going out.

Secondly, the return of the $5 Supreme pizza. Domino’s stores don’t make a profit on these pizza’s but they are popular, they drive customer traffic and other sales.

The result is a strong rise in half year profit and shares set new three-year highs of $66.19 this week.

A couple of good apps that have caught my attention

I love what you can do with smartphone apps at the moment. Two caught my attention this week… a money management tool and a cheeky weather app.

GetReminded is a free app for desktop, iOS and Android smartphones that enables users to set reminders for when it’s time to renew subscriptions, contracts, policies and documents to avoid renewing unused services, while allowing more time to negotiate better deals on the contracts they do need.

Co-founder Silje Dreyer, reckons people can save as much as $3,000 a year by knowing when their contracts are due for services like mobile phone, electricity, car insurance, home and pet insurances, as well as shedding obsolete streaming services and software subscriptions.

The other app is a bit of a cheeky one. A weather app called WTForecast.

I have a daughter who has recently moved to Perth, is 7 months pregnant (with 2 young sons already) and is finding the February heat really hard to cope with. It’s getting her a bit down.

So she found this weather app which gives a funny commentary on each day’s forecast… its settings allows you to dial the profanity up or down. I have been laughing out loud.

Previous article Have you ever wondered why some people are just better with money?
Next article CBA is giving homeowners a break on their mortgage repayments if family member dies or falls terminally ill
Via News
Tags Market update