Snapshot Of The Last Seven Days

– Pretty quiet on the economic front. No major data announcements

– Global share markets have been focussed on the barrage of profit results from major American companies… it’s their reporting season. Results have been a pretty mixed bag.

– Residential property clearance rates continue to be strong in Sydney and Melbourne which is seeing that strong rebound in prices continue.

In my ongoing personal Campaign For Optimism (to remind people we don’t have it too bad in this country) I often quote the Credit Suisse Global Wealth Report which has the average Australian as the second wealthiest in the world behind the Swiss.

But in this year’s report the average Aussie has dropped to fourth behind the Swiss, Hong Kong and America. Which is still pretty good.

The average wealth levels of an Australian adult tumbled $US28,670 ($41,765) to $US384,640 over the past year because of a weaker Aussie dollar…. because they measure everyone in US dollars.

The report found Australia suffered a decline in US dollar-denominated terms of 6 per cent and was the only nation covered in the research where home prices fell by 2 per cent or more over the year.

Falling wealth levels also saw the number of Australian millionaires tumble by 124,000 to 1.18 million from a year earlier in US dollar terms, the largest decrease of any country in the report. Australia now ranks ninth in terms of total millionaires globally when measured in US dollars. Think about that. We have a population of 26 million people and 1.18 million of them are net millionaires.

Where The Jobs Are

Commsec regularly analyses where the strongest and weakest job prospects are. I find it fascinating and good indicator of where the best chances are to find a job. 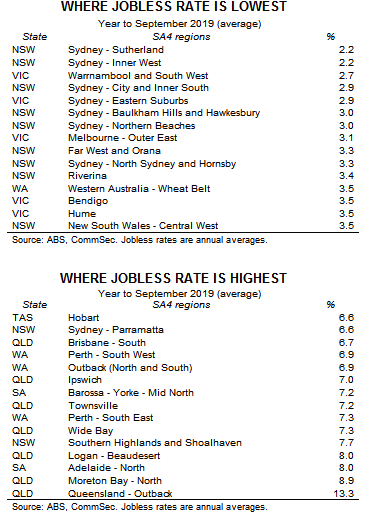 Money Doesn’t Buy Happiness… so what does

A mate of mine this week sent me a fascinating research report into what makes us happy.

Using innovative new methods researchers at the University of Warwick, University of Glasgow Adam Smith Business School and The Alan Turing Institute in London have built a new index that uses data from books and newspapers to track levels of national happiness from 1820. Their research could help governments to make better decisions about policy priorities.

Studying the index, the researchers found that:

– In post-war UK the worst period for national happiness occurred around the appropriately named “Winter of Discontent.”

– In post-war USA the lowest point of the index coincides with the Vietnam War and the evacuation of Saigon.

Commenting on the findings, Professor Thomas Hills said: “What’s remarkable is that national subjective well-being is incredibly resilient to wars. Even temporary economic booms and busts have little long-term effect. We can see the American Civil War in our data, the revolutions of 48′ across Europe, the roaring 20’s and the Great Depression. But people quickly returned to their previous levels of subjective well-being after these events were over. Our national happiness is like an adjustable spanner that we open and close to calibrate our experiences against our recent past, with little lasting memory for the triumphs and tragedies of our age.”

Previous article Is your state the cheapest or most expensive place to buy a new car?
Next article Ask Kochie: How to manage credit card debt, investing for children and social media strategy
Via Your Money
Tags Market update